Home
Mobile
Your Next Smartphone Probably Won’t Come with a Charger – Tech.co 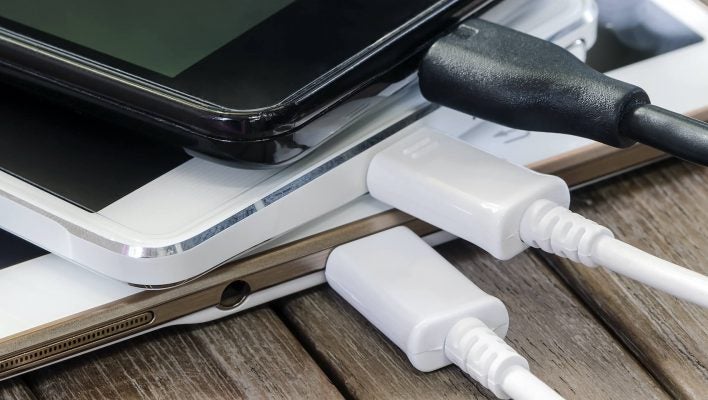 Buying a smartphone might never be the same again, as major manufacturers are debating the merits of doing away with free chargers included in the packaging of popular devices.

From laptops to wireless ear buds to smartphones, including free chargers has been the absolute standard in consumer tech for decades. After all, you wouldn’t sell a desktop computer or a gaming console without the power cord, so why would you sell a battery powered product without a charger?

In 2020 though, pretty much everyone already has at least one charger, and the growing electronic waste problem (and maybe a bit of greed) is pushing smartphone companies to reconsider.

Samsung & Apple Could Be Getting Rid of Chargers

In the last few weeks, multiple reports have surfaced noting that Samsung and Apple are both mulling over plans to ditch the free chargers included with their popular smartphones.

At the end of June, analysts told 9to5Mac that Apple was planning to not only stop providing free chargers in the box for the iPhone 12, but also to do away with the wired earbuds. The reasoning for the move is to cut costs, as the device is notably more expensive given the 5G capabilities, and Apple wants to try to keep the price point similar to the iPhone 11.

Then, this week, a report from a Korean news site came out noting that Samsung was planning a similar move by getting rid of included chargers next year. In addition to the cost reduction, reports stated that the company was hoping to cut down on electronic waste with the decision, which is admittedly a hard point to argue.

While this decision may be an inconvenience, it’s far from a bad idea. At this point, pretty much everyone has at least one charger lying around their house. In fact, the reality is that most people are sitting on a multitude of electronic products they don’t use, and that’s the problem.

Given these numbers alone, it’s easy to see why tech giants like Apple and Samsung might be interested in cutting back on the influx of chargers to users’ homes. But let’s be honest, is that the only reason for the decision?

Apple and Samsung certainly aren’t going to start charging for chargers exclusively for the sake of the environment. However, neither company is denying the abject financial motivations behind the move, which is a nice change of pace.

For starters, Apple was quick to admit that the move was financially motivated. With the popular trend of affordable smartphones, the company reportedly wants keep costs down on the iPhone 12, and they can’t do that with their new 5G functionality. By dropping the charger and the wired headphones, Apple is able to keep overall cost down, while pushing the expense (approximately $60) onto consumers.

Samsung has admitted the same: 5G technology is expensive and doing away with free accessories will cut costs, particularly for the many users that already have chargers and headphones at home.

In all likelihood, Apple and Samsung are using the move to greenwash their image in hopes of improving their less-than-stellar reputation as substantial contributors to climate change, like Samsung’s claim in 2018 to run on 100% renewable energy by… 2020 (it doesn’t). But in this day and age, acting in favor of social good and attracting new customers are one in the same, which makes it hard to engage in a selfless act when it comes to climate change in the tech industry.

Did you find this article helpful? Click on one of the following buttons

We’re so happy you liked! Get more delivered to your inbox just like it.

We’re sorry this article didn’t help you today – we welcome feedback, so if there’s any way you feel we could improve our content, please email us at contact@tech.co

Conor is the Senior Writer for Tech.co. For the last four years, he’s written about everything from Kickstarter campaigns and budding startups to tech titans and innovative technologies. His extensive background in stand-up comedy made him the perfect person to host tech-centric events like Startup Night at SXSW and the Timmy Awards for Tech in Motion.
You can email Conor at conor@tech.co.

close Building a Website? We’ve tested and rated Wix as the best website builder you can choose – try it yourself for free Try Wix